NOTE: This is an affiliate event owned and operated by Black Gold BCA, an Oklahoma-based affiliate organization to CSI. Participants must be members of the Black Gold BCA and at least one of CSI's leagues; the BCA Pool League or the USA Pool League.
Select "Black Gold BCA" from the drop-down menu.
REGISTER ONLINE
Need to change to an existing registration?
REQUEST CHANGE
All the information about the event. 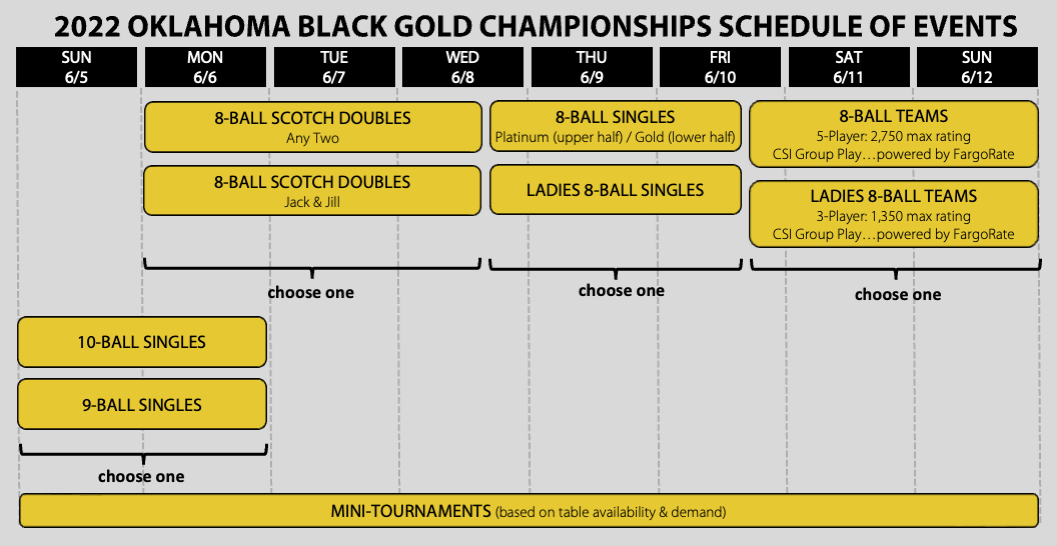 Teams CSI Group Play format – TEAMS GUARANTEED 4-5 MATCHES!
The team divisions will now use a group round robin tournament format. The goal is to randomly place teams in groups of 5 or 6 (if practical). Teams in a group of six (6) will play at least five (5) matches. Teams in a group of five (5) will play at least four (4) matches. Each match in the group stage consists of 15 games (5-player teams) or 9 games (3-player ladies’ teams) and will be handicapped using FargoRate.

The top two (2) teams from each group (if practical) will advance to a single elimination final bracket. Additional wild card teams will be selected from the group stage to fill the final bracket. All matches in the final stage will be handicapped using FargoRate.
​
Scotch Doubles: Any Two + Jack & Jill Divisions
We are offering two scotch doubles divisions. The “Any Two” division has no male/female requirement. Teams may consist of male/male, male/female or female/female. Teams in the “Jack & Jill” division must consist of one male and one female.
​
Free Vegas Entries
The winning team from each team division will win free entry into the 2023 BCA Pool League World Championships or USA Pool League National Championships in Las Vegas! Click here for more info.